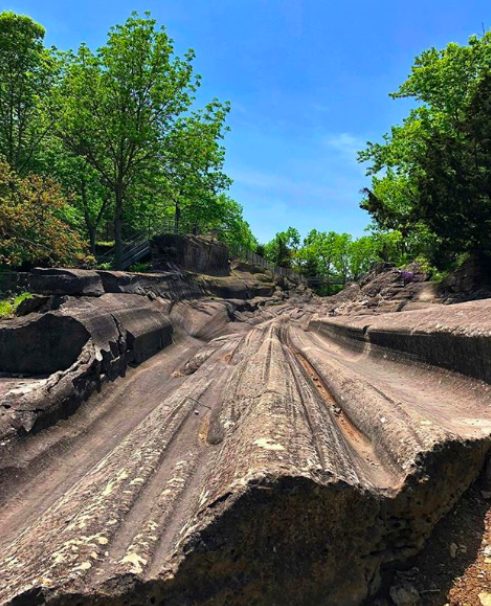 The Glacial Grooves are the most popular natural destination on Kelleys Island. Our grooves are the largest and best accessible
example of this geological phenomenon anywhere in the world! They are located at the intersection of Division Street and Titus Road,
only a mile and a half north of downtown.

The glacial grooves are 400 feet long, 35 feet wide, and up to 15 feet deep. They were created by the slow movement of the massive glacier that created the Great Lakes and Lake Erie Islands. When glaciers move across the earth, they pick up rocks, soil, and other debris, and drag them along. As the ice crept over the soft limestone bedrock of Kelleys Island, these harder bits of rock gouged the grooves that we see today. Originally, the grooves were filled with soil, debris, and quarry waste. In 1972, excavation to uncover the full extent of the grooves began, and they have been a popular tourist attraction ever since.

The grooves are also important to historians, scientists, and students. They give us valuable information about the direction and movement of the glaciers that shaped our entire landscape. If you only have time to visit one Kelleys Island destination, the Glacial Grooves are not to be missed!

If you are having any questions, please feel free to ask.

Drop Us a Line